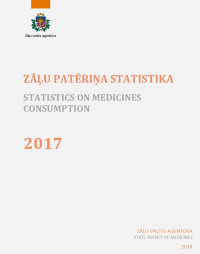 The State Agency of Medicines (SAM) has published the new report “Statistics on Medicines Consumption 2017” that includes data on medicines consumption in Latvia from 2013 to 2017.

According to the statistical data the sales volume of authorised medicines in Latvia from 2016 to 2017 has increased by 6%, reaching 392.78 million euros in 2017. Acetylsalicylic acid and ibuprofen were the most selling non-prescription medicines in Latvia in 2017 according to international non-proprietary names (INN). The most sold Latvian manufacturers’ medicines with the respect to the turnover in euros and to the number of packages sold over the last five years were meldonium containing medicines.

The number of licensed medicines wholesalers has also increased reaching 90 wholesalers operating in Latvia in 2017. Three largest wholesalers provided 75% of the total volume sold to pharmacies in Latvia.

More information about the new report

The report “Statistics on Medicines Consumption 2017” contains data regarding total turnover of medicines in euros, number of packages sold, turnover distribution according to various consumer groups and dispensing status of medicines and turnover expressed in defined daily doses (DDD) per 1000 inhabitants of Latvia per day (DID)*. It also provides broader insight into the market of medicines manufactured in Latvia.

* The Anatomical Therapeutic Chemical (ATC) classification system and the defined daily dose (assumed average maintenance dose per day for a drug used for its main indication in adults) as a measuring unit had been used in this new report “Statistics on Medicines Consumption 2017”. The medicines consumption is expressed as DDD per 1000 inhabitants per day (DID).