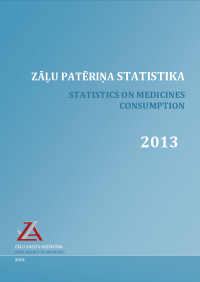 Like before, also in 2013 there was an increase in the number of packagings of medicines sold (44.33 millions of packagings - 1% increase) and in the turnover of medicines in euros (307.59 EUR - 4% increase). In 2013 the average price per packaging of medicines (~7 EUR) included in the Drug Register of Latvia increased by 3% (in comparison - in 2012 the increase was 2%). The average price per packaging of unauthorised medicines (~12 EUR) increased by 11 % in 2013 (in comparison - there was a decrease in price in the previous two years).

The largest groups of consumers of medicines have remained the same - pharmacies, medicines wholesalers and healthcare institutions. 83% of the turnover of medicines (expressed in euros) in pharmacies was delivered by 4 of the largest medicines wholesalers - Recipe Plus, Tamro, Magnum Medical, Euroaptieka. The proportion of prescription and non-prescription medicines on the market almost did not change in 2013 with prescription medicines making up 55% of the packagings sold in the market, 81% of the turnover in euros, 79% according to DID (defined daily doses per 1000 inhabitants per day). In 2013 the market distribution according to the main ATC (Anatomical Therapeutic Chemical Classification) groups also did not change with medicines for the treatment of cardiovascular diseases still firmly remaining in the first place.

The report contains information regarding total turnover of medicines in euros, number of packagings sold, turnover distribution according to various consumer groups, according to dispensing status of medicines, turnover expressed in defined daily doses (DDD) per 1000 inhabitants of Latvia per day (DID). It contains also information regarding the most marketed medicines in Latvia, as well as gives broader insight into the market of medicines manufactured in Latvia. The data on consumption of medicines was obtained by assembling and analysing the sales reports submitted by authorised medicines wholesalers to the State Agency of Medicines.

Statistics on consumption of medicines is a data source for analysing the consumption, planning actions to be taken in case of predicted or unpredicted disruptions in the availability of medicines, as well as for adoption of decisions to promote safe use of medicines.

With the help of the consumption data expressed as DID it is possible to evaluate the number of patients that consume medicines belonging to a particular group of medicines, thus, in case of issues regarding safety of medicines the gravity of the situation can be assessed.