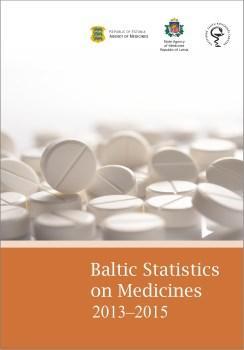 According to statistical data the overall consumption of medicines from 2013 until 2015 increased in all three Baltic States. Some groups of medicines were being consumed similarly in the Baltic States, but other had substantial consumption differences, for example, antidepressants, anxiolytics, sleep and sedative medicines and statins. Top 15 of over-the-counter medicines in 2015 were rather similar in Latvia, Lithuania and Estonia – the most consumed were medicines with an active substance acetylsalicylic acid.

Above mentioned and more statistics can be found in the new statistical book on consumption of medicines “Baltic Statistics on Medicines 2013-2015” that is being prepared and published by the State Agency of Medicines of Latvia, State Agency of Medicines of Estonia and the State Medicines Control Agency of Lithuania. The book includes data on medicines consumption in the Baltic States over the last three years, as well as short descriptions of the pharmaceutical market, regulatory requirements and reimbursement systems of medicinal products in these countries.

Dr. Med. Vilnis Dzērve, Head Researcher at the Institute of Cardiology and Regenerative Medicine, University of Latvia, regarding the book “Baltic Statistics on Medicines 2013-2015”: “This publication provides the opportunity for a careful reader to make conclusions not only regarding the economic aspects of consumption of medicines, but even more importantly – regarding changes in the paradigm of the skills and treatment carried out by doctors, the significance of the state influence on the policy of medicinal products' prices, as well as limitations to increasing efficacy of pharmacotherapy. It is clearly illustrated by several examples from the aforementioned collection of data. In 2015, antithrombotic agents had a seemingly appropriate position (1st and 2nd place according to DDD/per 1000 inhabitants/ per day) in all three Baltic States in accordance with the guidelines, however, the increase over the last 3 years has been only by 8-11%. That might make you think that the reimbursement system for medicines related to prevention of thromboembolic events has become more effective.”

Dr. Med. V. Dzērve also says: “The hypertension pharmacotherapy is also seeing some changes. Even though the structure of medicinal products has not changed significantly over the last several years, introduction of combination therapy can be observed. For example, the use of ACE inhibitors and calcium channel antagonists has increased by more than 50%. Similar analysis can be conducted not only for groups of medicinal products, but also for individual medicinal products over several years. Therefore, the publication “Baltic Statistics on Medicines 2013-2015” can be considered as a very practical and analytical material offering the opportunity to draw important conclusions regarding the field of pharmacotherapeutics in the Baltic States.”

The Anatomical Therapeutic Chemical (ATC) classification system and the Defined Daily Dose (assumed average maintenance dose per day for a drug used for its main indication in adults – DDD) as a measuring unit had been used in this book. The medicines consumption is expressed as DDD per 1000 inhabitants per day (DID).