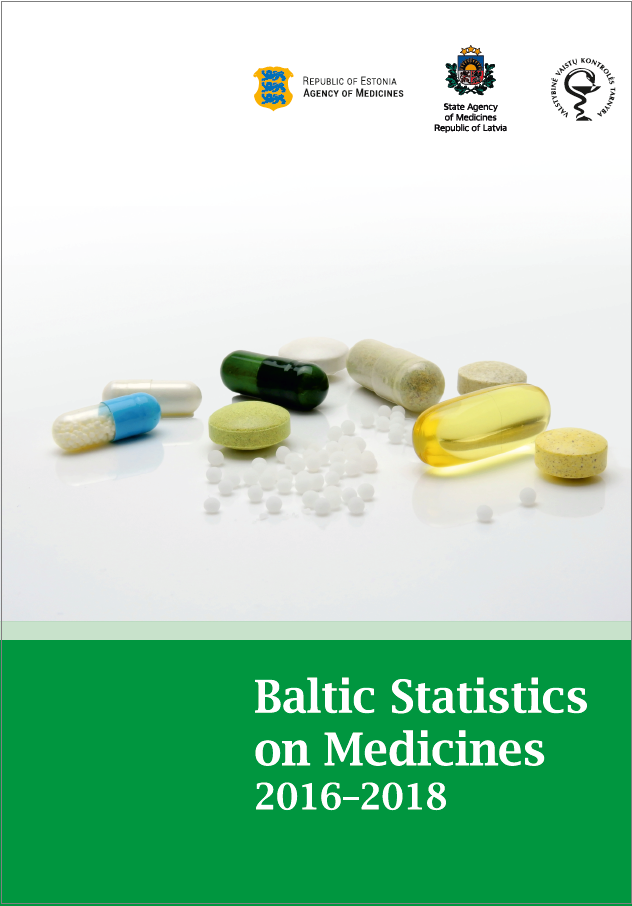 Total consumption in Estonia increased by 8%, in Lithuania by 8 % and in Latvia by 4%, when comparing to 2015. Consumption of alimentary tract and metabolism drugs increased the most in Lithuania (increase of 30.63 DDD) and in Estonia (16.99 DDD). However, in Latvia the highest increase was in cardiovascular drugs – 31.76 DDD).

A comprehensive analysis on the consumption of medicines in three Baltic States over a three-year period “Baltic Statistics on Medicines 2016-2018” was published for the 3rd time since 2013. This consumption analysis enables evaluation of habits of medicines use, also changes and trends in this particular region.

Consumption data of Lithuania, Latvia, and Estonia was analysed in various aspects. What is new in this latest edition –included conclusions and remarks of experts, doctors on consumption changes in concrete ATC groups during 2010-2018 period in connection with reimbursement changes and changes in treatment guidelines. You can find remarks of experts on consumption changes of drugs used in diabetes (ATC group A10), antibacterials for systemic use (J01), anti-inflammatory and antirheumatic products (M01), psycholeptics (N05) and drugs for obstructive airway diseases (R03).

The new book also contains a short description of the pharmaceutical market, regulatory requirements, medicinal product reimbursement systems in all three countries. All three Baltic countries were also compared by other aspects: statistics of various licences, wholesalers, financial aspect (turnovers) and many other aspects, which each individual person will find while reading this book.

In order to ensure that the results are comparable and representative, specialists from the medicines agencies in Lithuania, Latvia, and Estonia were in a very close collaboration with each other.

*The Anatomical Therapeutic Chemical (ATC) classification system and the Defined Daily Dose (assumed average maintenance dose per day for a drug used for its main indication in adults – DDD) as a measuring unit had been used in this book. The medicines consumption is expressed as DDD per 1000 inhabitants per day (DID).